Akashi: A Street Food Paradise Just Off the Beaten Track 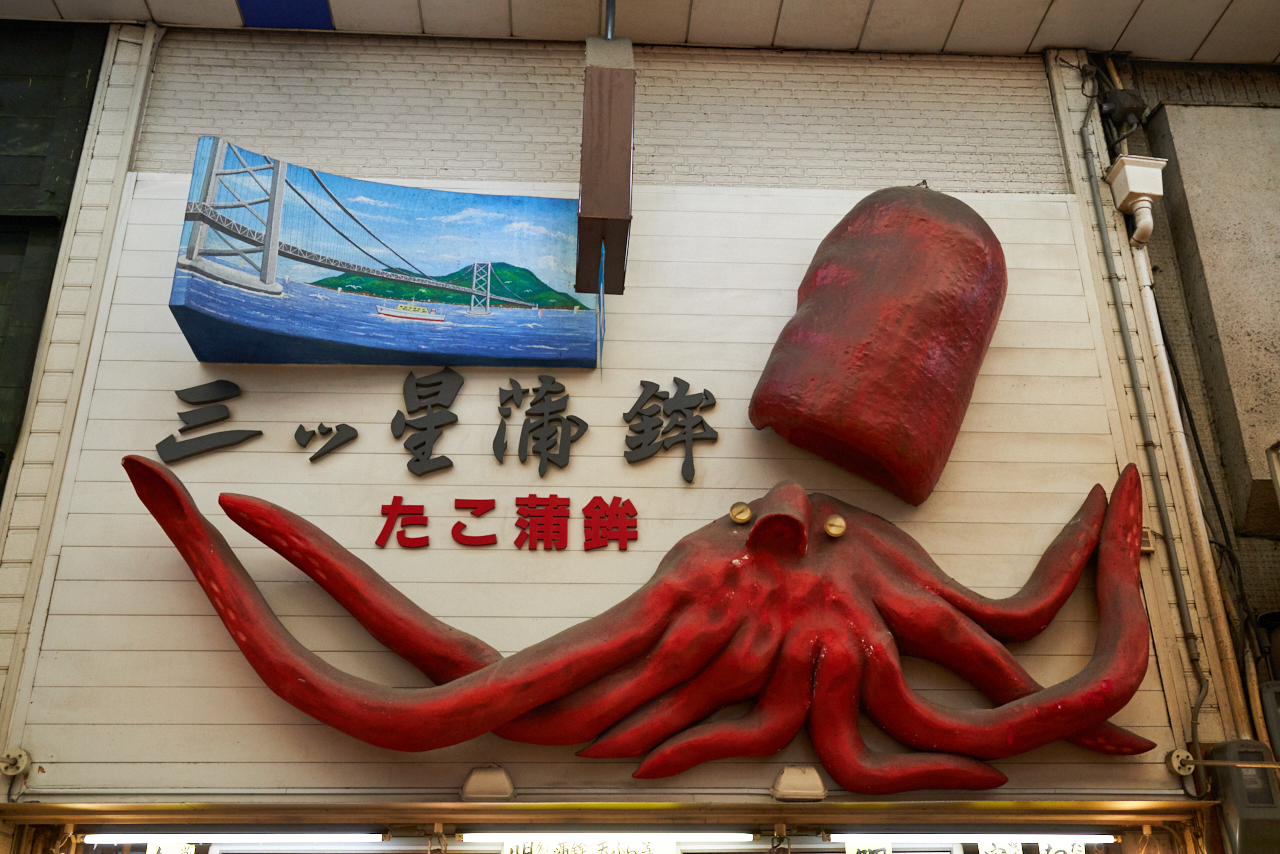 When it comes to travel within Kansai, the lion’s share of attention is typically given to the region’s big three; Kyoto, Osaka, and Kobe. While famous for good reason, Kansai’s oft overlooked other cities offer a wealth of experiences for visitors. Located just half an hour west of Kobe along the Seto Inland Sea, Akashi is one such hidden gem. Though rich in both history and sightseeing opportunities, it is perhaps best noted for its incredible food culture. With its close proximity to the sea, it is home to some of the freshest seafood in the region and not to be missed by fans of Japanese street food. 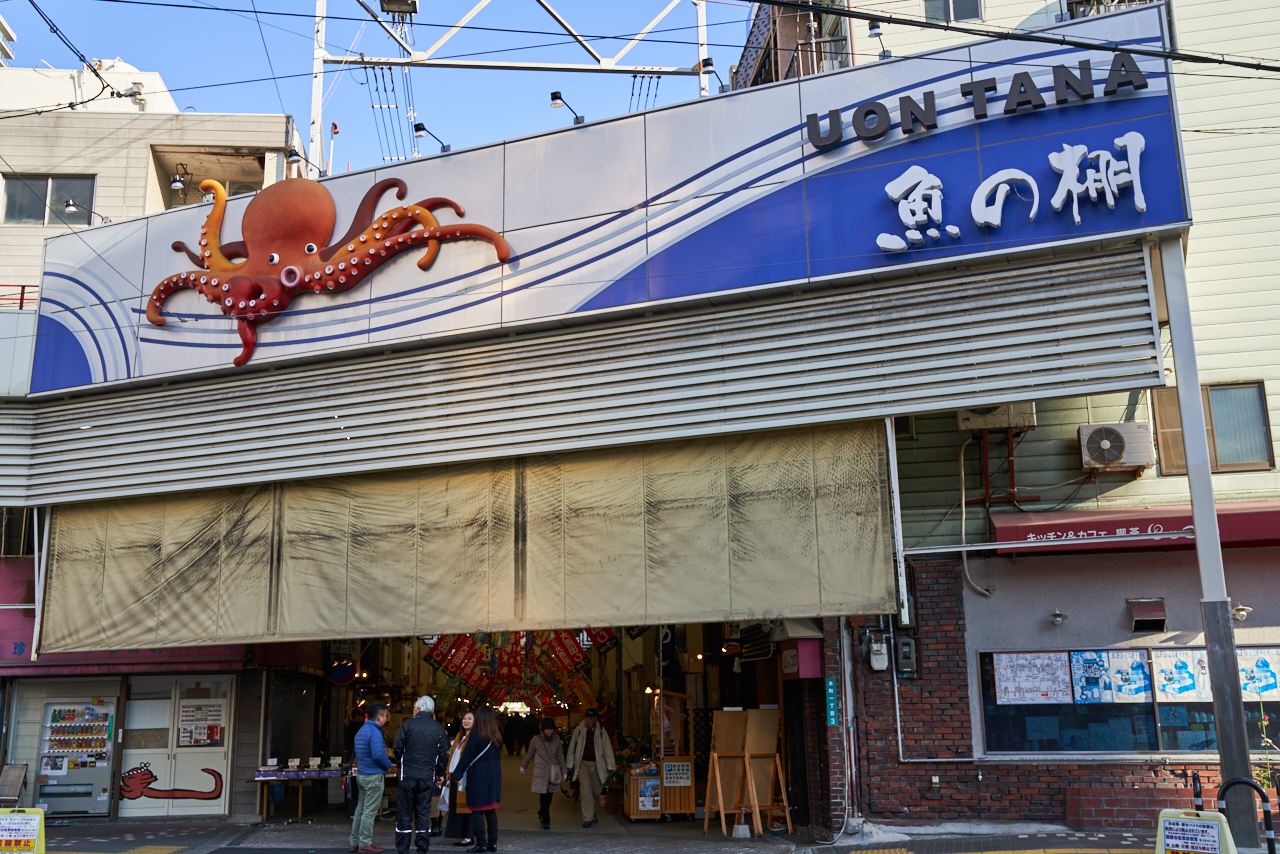 The central feature in the Akashi culinary experience is unquestionably the Uonotana fish market. Built over 400 years ago in conjunction with Akashi castle; it has stood the test of time (unlike its counterpart) to become more than a mere marketplace, but a highly revered Akashi institution. Throughout its 350 meter long passageway are over 100 shops, most of which specialize in seafood.

Given its location next to a section of the Seto Inland Sea known as the Akashi Straits, merchants in Uonotana are able to provide some of the freshest fish found in Japan on a daily basis. At 11:30 AM each day, fishermen’s daily hauls are auctioned off near the straits and promptly brought to the marketplace where they are sold. The fish are so fresh in fact, it’s not uncommon to see sea breams flopping about on trays, or tiny octopuses attempting to scurry away from their containers where they wait to be purchased. 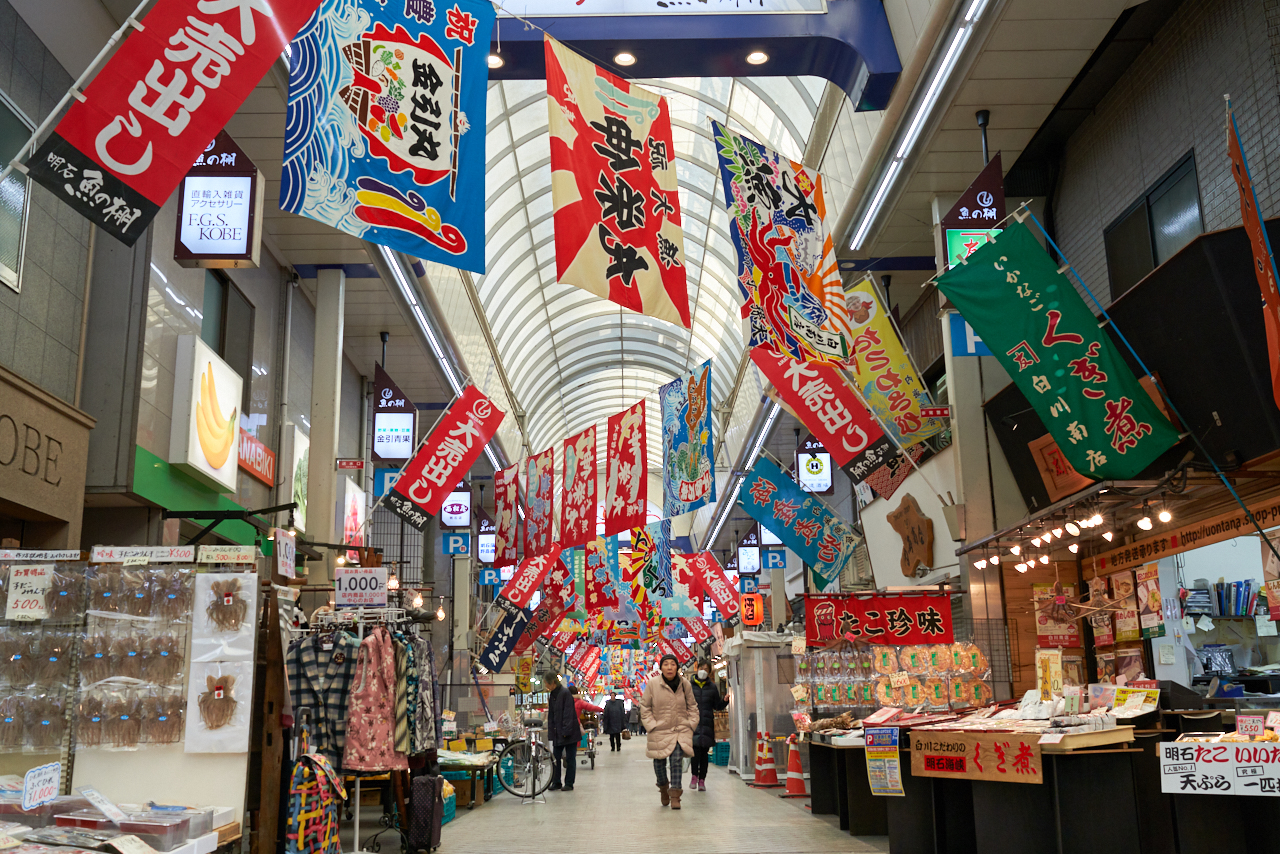 As you enter the marketplace, each one of your five senses are awakened to the scene that unfolds before you. Bright red and blue banners hung the entire length of the ceiling billow in the breeze that makes its way through the covered passage, carrying with it a mix of smells indistinguishable from one another, but altogether hunger inducing. An array of colorful fish, most of which are entirely unfamiliar to foreign visitors, line either side of the walkway. 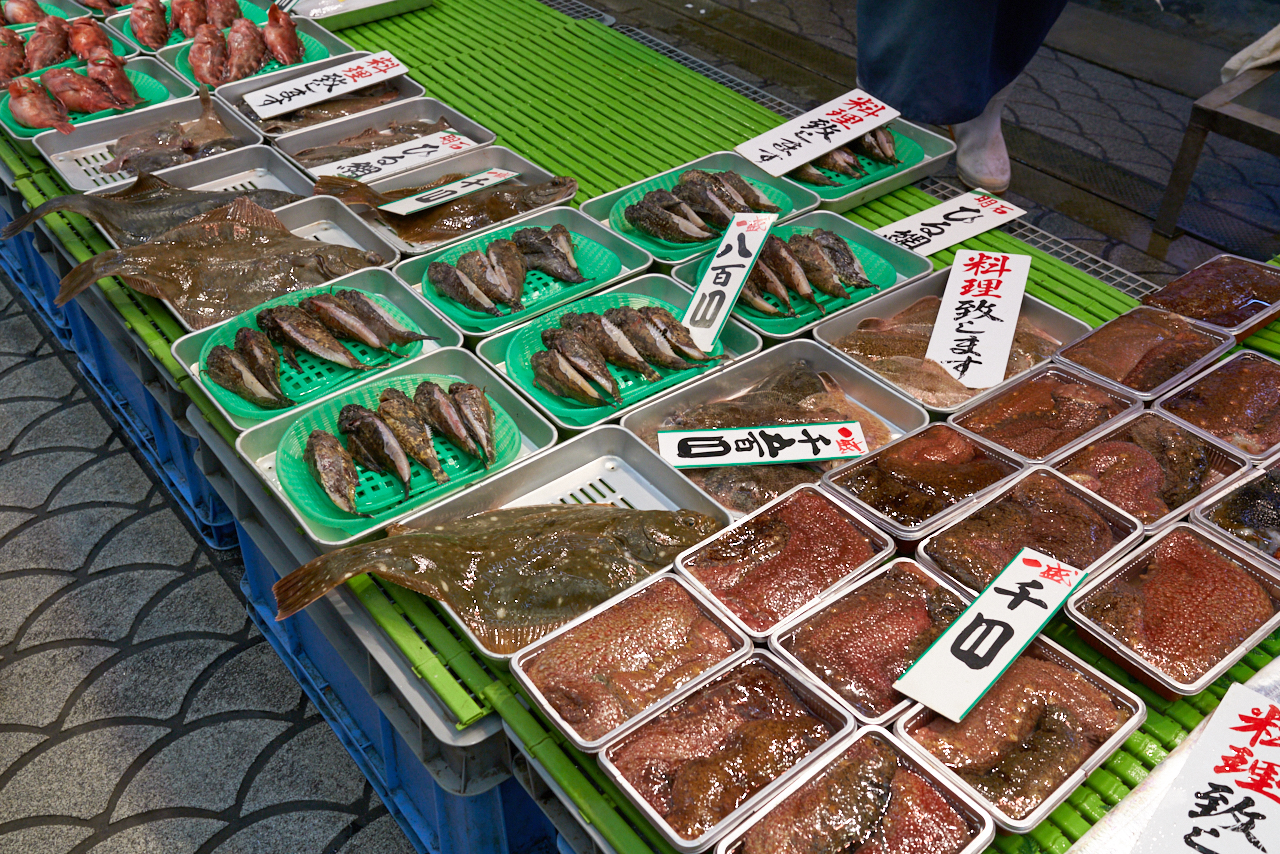 In front of each shop, eager merchants with sample trays in hand call out to passing shoppers. 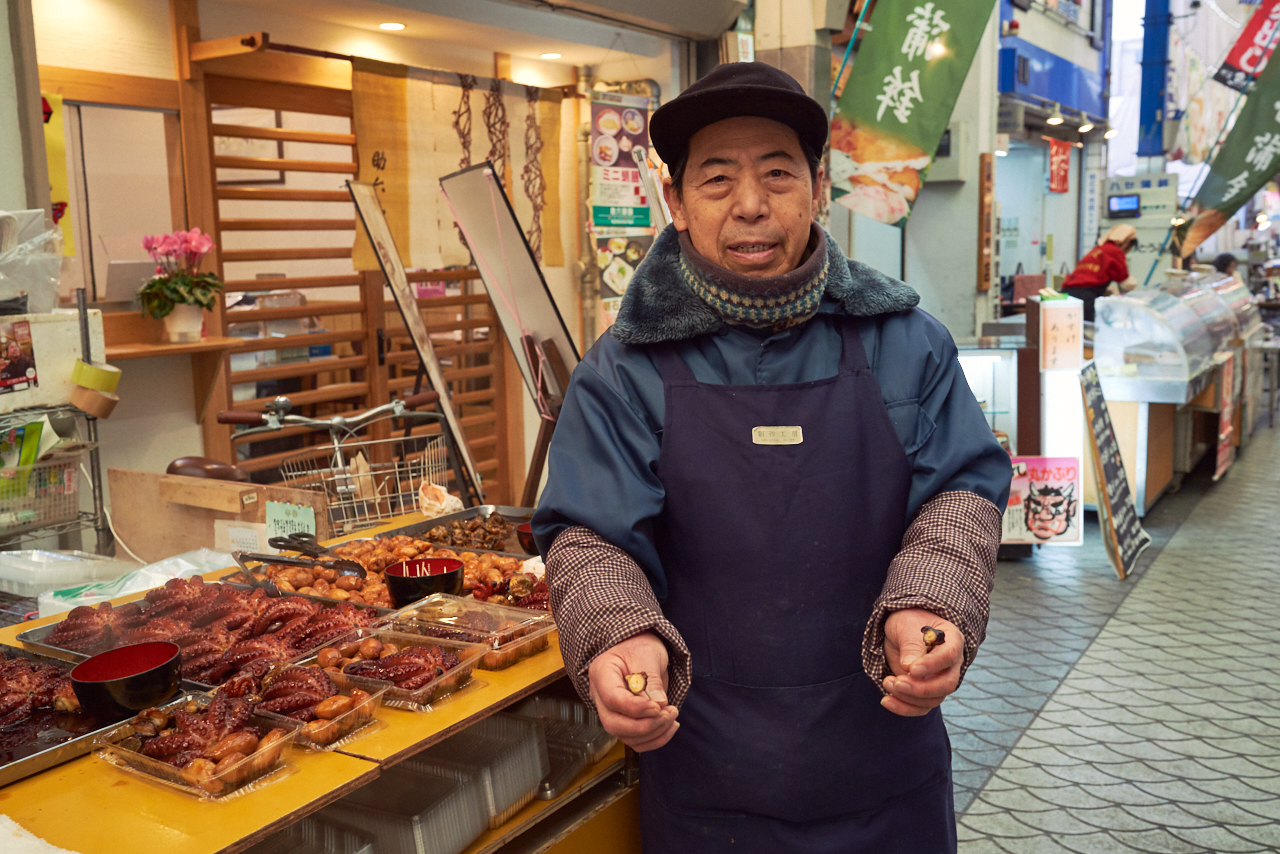 Spend a few moments soaking in the ambiance of it all and you will find that no grocery store in existence could ever compare to the vibrancy and energy of a street market like this. It is for this reason that Uonotana has existed for over four centuries and will continue to do so for many more.

Those somewhat familiar with Japanese customs may know that walking while eating is typically considered a social faux pas throughout the country. If one buys food from a stand, they are expected to eat it then and there, or find a place to sit before enjoying it. In Uonotana, this taboo is cast aside. Many of the foods sold at the various stalls throughout the market place are sold in portions and containers that make them easy to eat while walking. In fact, it’s not uncommon for shoppers to visit several stalls during the lunchtime hours; creating their own on-the-go picnic. Let’s take a closer look at some of the market’s more popular foods.

Access: Approximately 5 minutes walking from Akashi Station. Follow signs for the market from the exit gate which will lead you across the street. There is a covered catwalk connecting the station to the market to help bypass traffic. 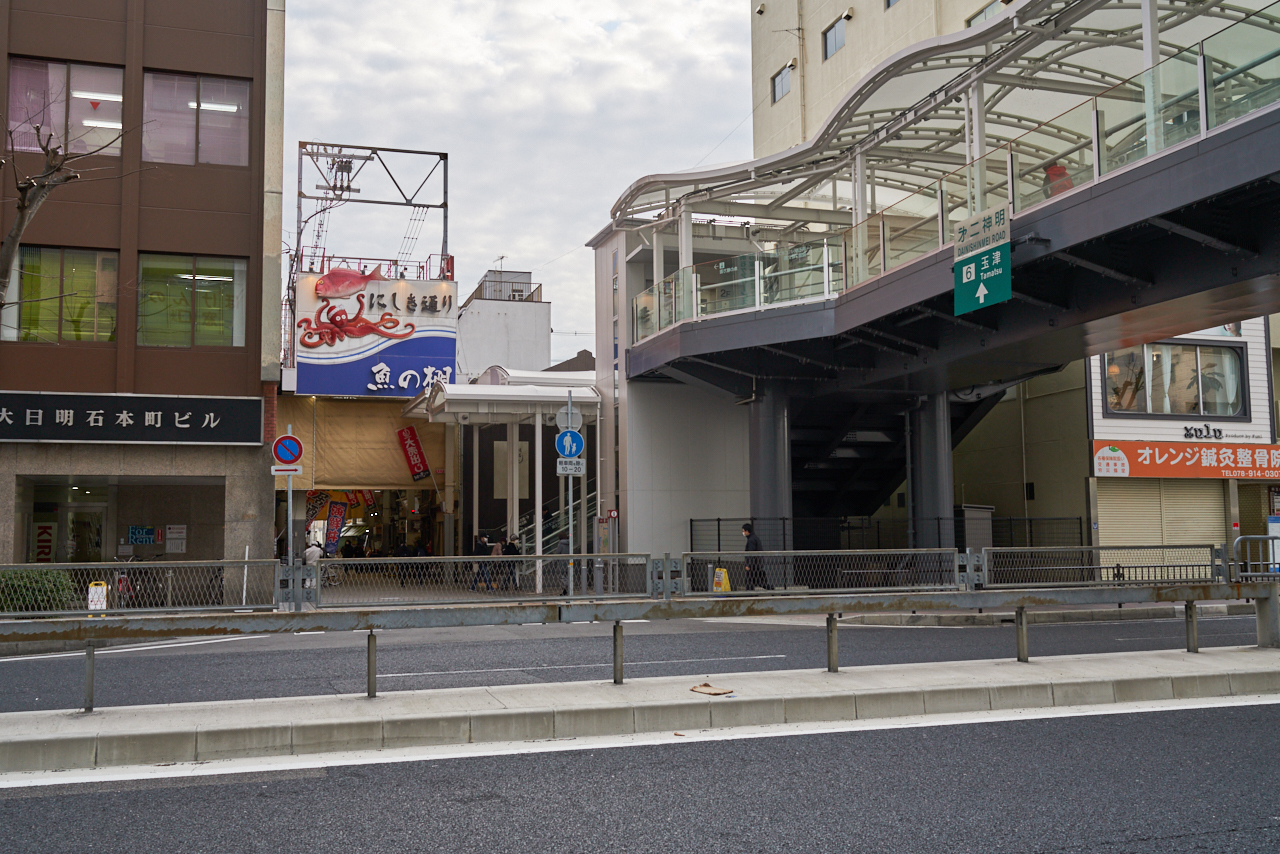 What the Locals are Eating

Much like the nearby city of Osaka, Akashi has built a reputation around the quality of their octopus. It seems one can’t go far in the city without running into octopus imagery, from signs outside of businesses to adorable keychains sold in souvenir shops. 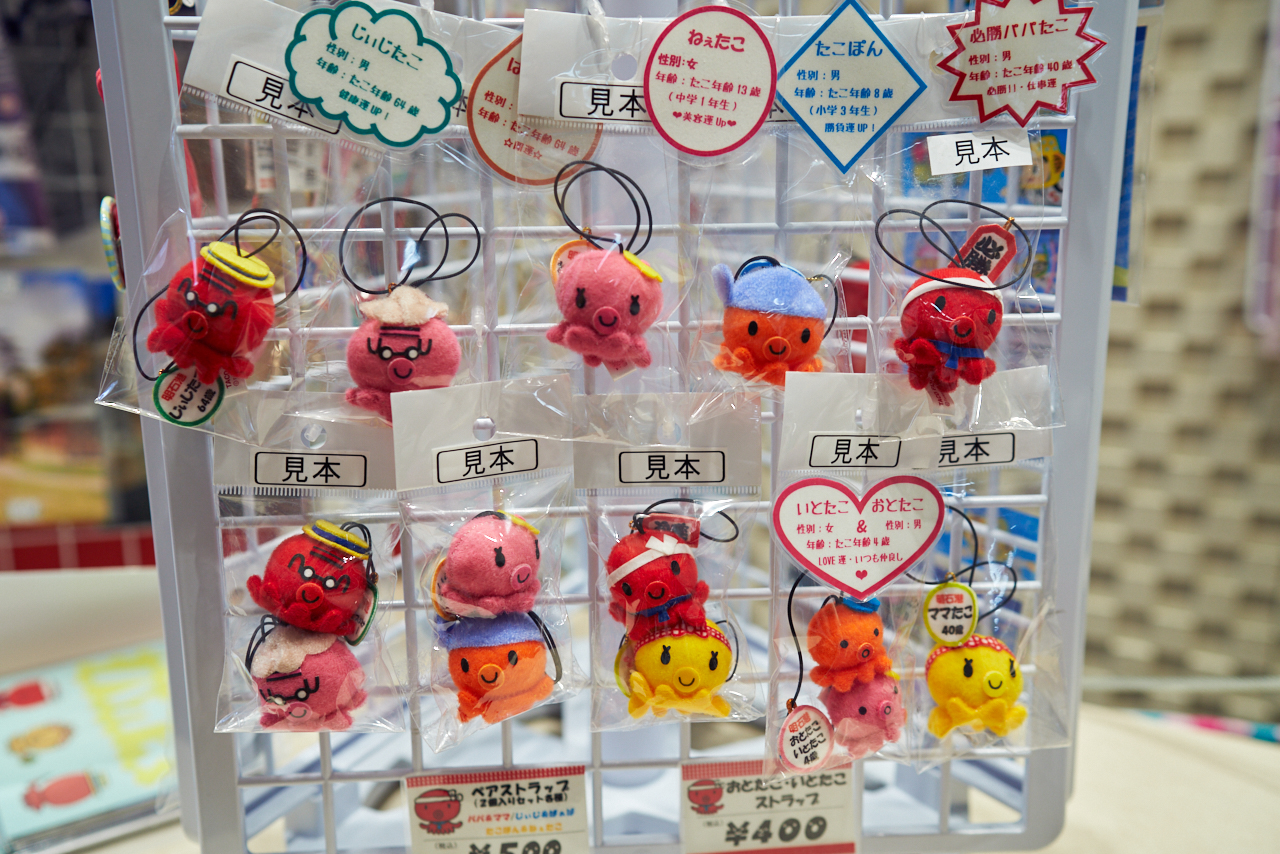 The star of the show is the Akashi-dako; a variety of octopus unique to the Akashi Straits. It is known for its short but thick arms; a product of living in the strong currents of the straits. While one may suspect that the meat would be tough or overly chewy, it is in fact quite lean as a result of the extra exercise of battling fast-moving waters, and has a pleasantly sweet taste. 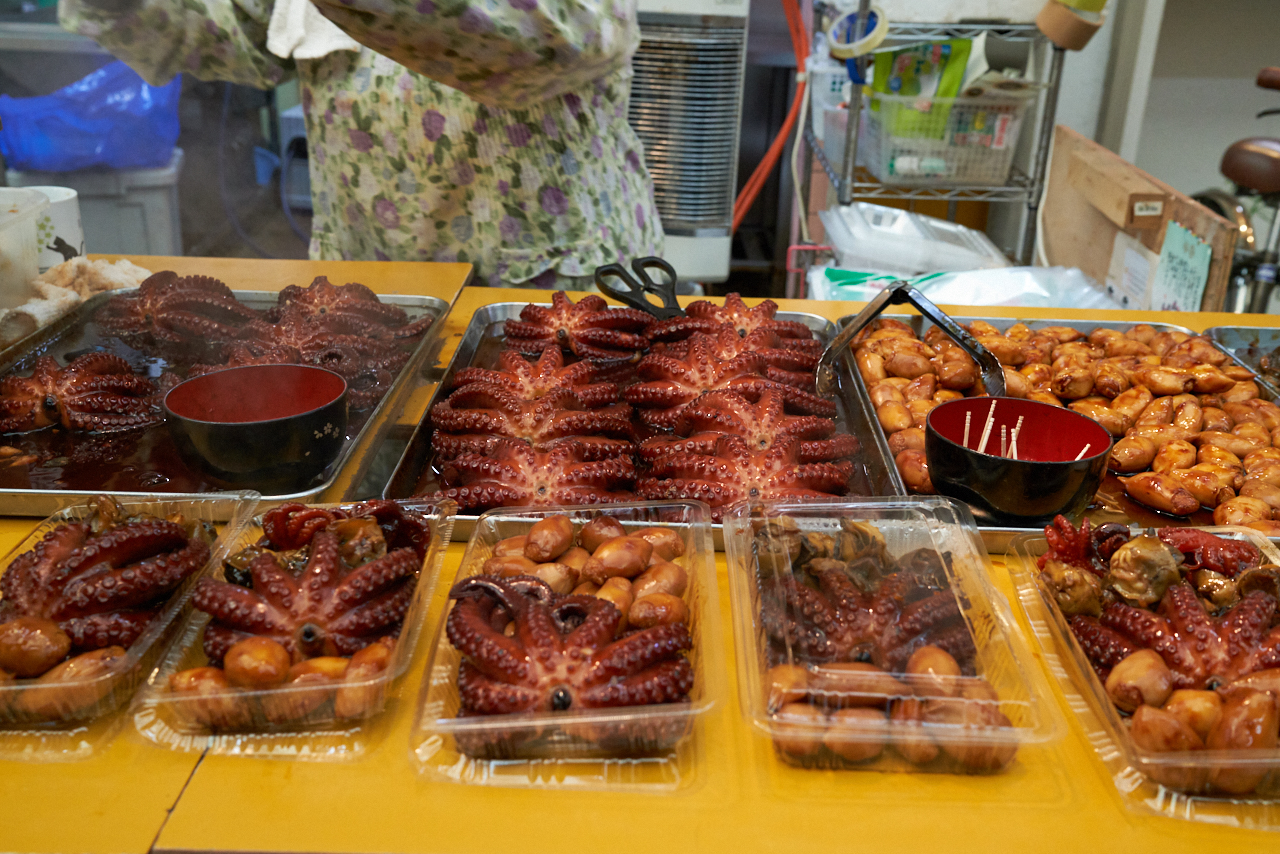 Throughout Uonotana, shoppers can find octopus served in a variety of styles, from bite sized portions coated in sticky, sweet sauce, to tiny octopus lollipops, to whole live octopuses for you to take home and prepare to your liking.

Of course, it wouldn’t be a Japanese fish market without a wide selection of fresh sashimi. Understandably however, raw fish is not for everyone. Those who prefer their food cooked and slightly less on the adventurous side need not worry. Another popular food sold in the market is a type of fried tempura pancake made with ground fish. 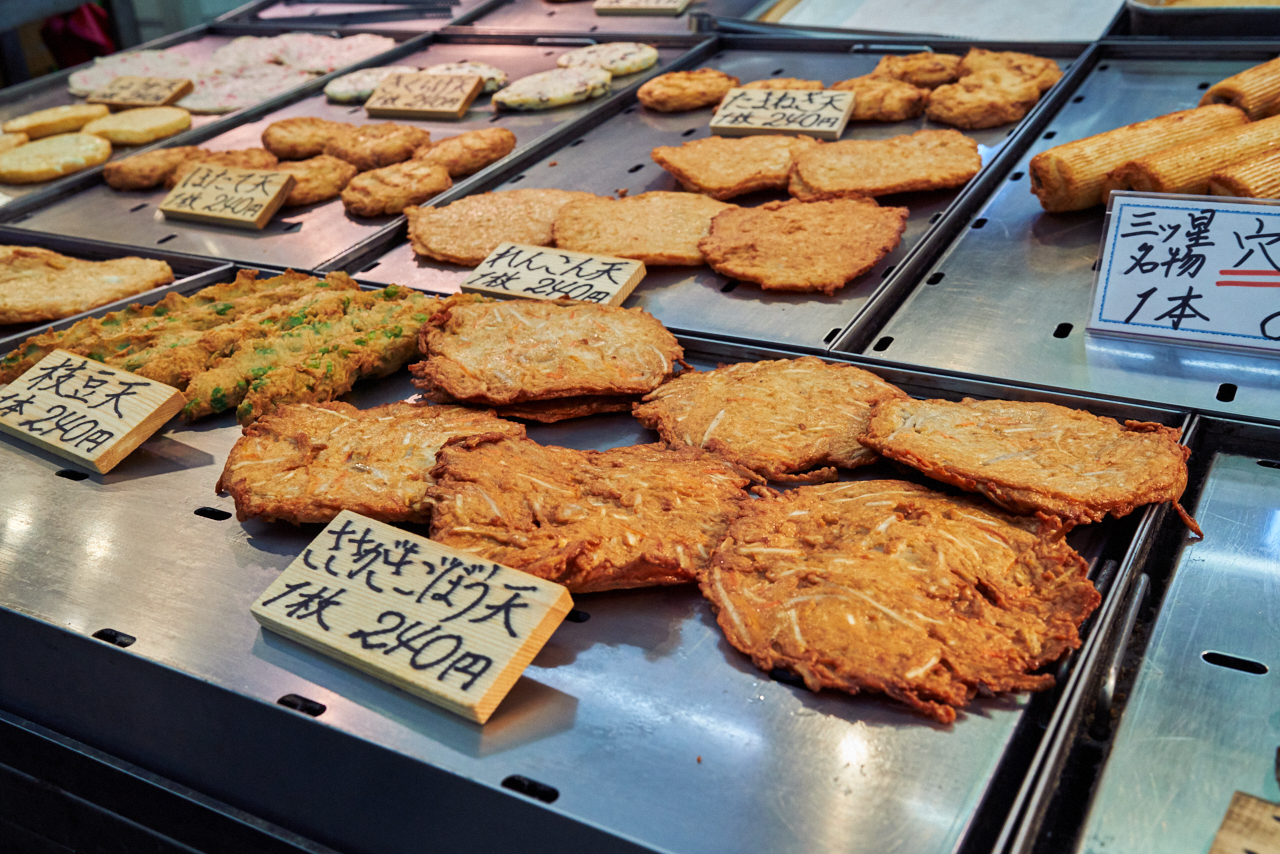 Known as satsuma-age, or simply “tempura” in the Kansai area, the fish is mixed with flour and various other ingredients such as vegetables, scallops, octopus to name a few; and fried to warm, chewy perfection. The taste is something akin to the fish sticks many in the west have grown to love and they make a great mid-day snack while shopping. 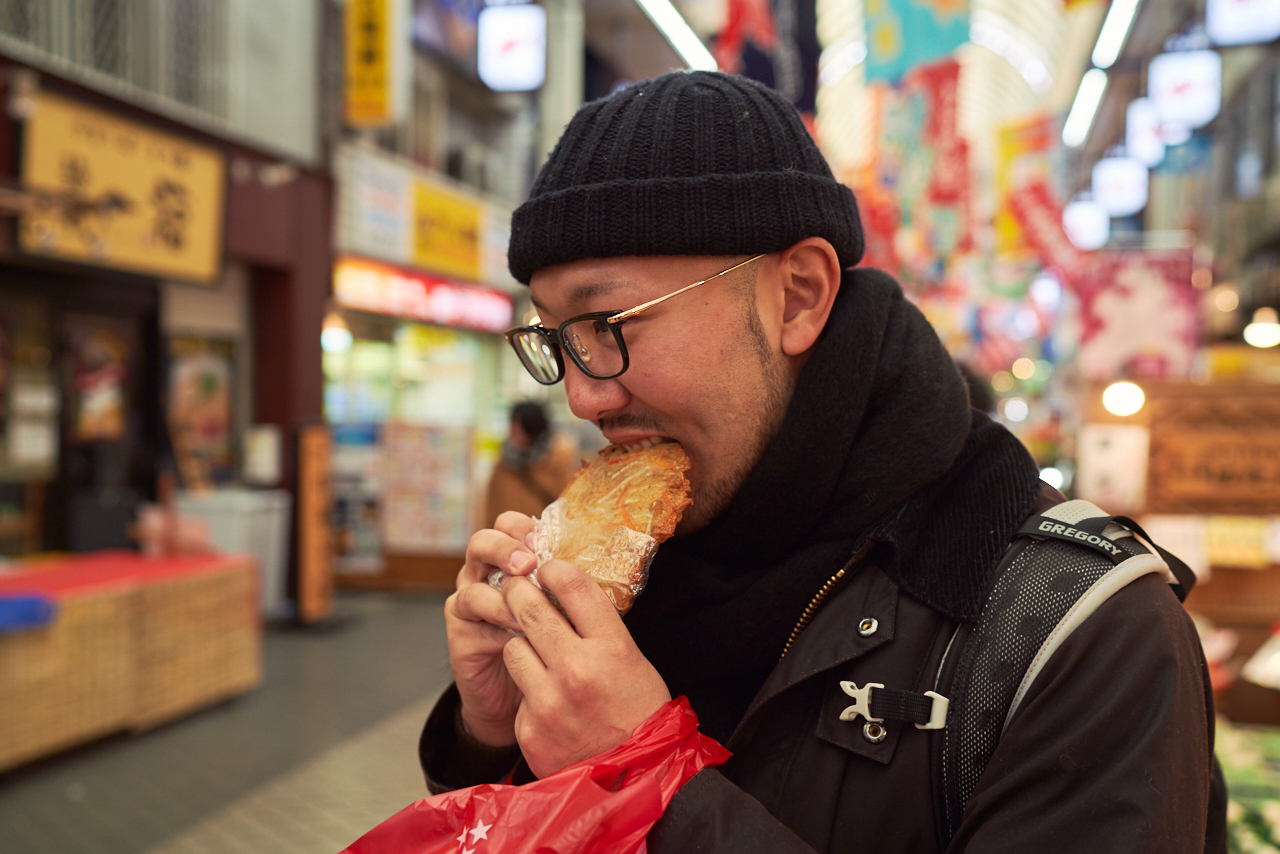 While on the topic of fried food, another Akashi staple known far and wide across Japan is akashiyaki. A not-so-distant cousin to its better-known counterpart, takoyaki, the Akashi variation is egg-based instead the familiar doughy flour-base of takoyaki. Known locally as tamagoyaki, these egg dumplings are filled with bits of octopus and lightly fried. Substituting flour for egg results in a fluffier texture and arguably, a more satisfying culinary experience.

One of the most famous akashiyaki shops in the city is GO. Found just outside the Uonotana market, it’s hard to miss with its bright yellow sign featuring a gorilla. 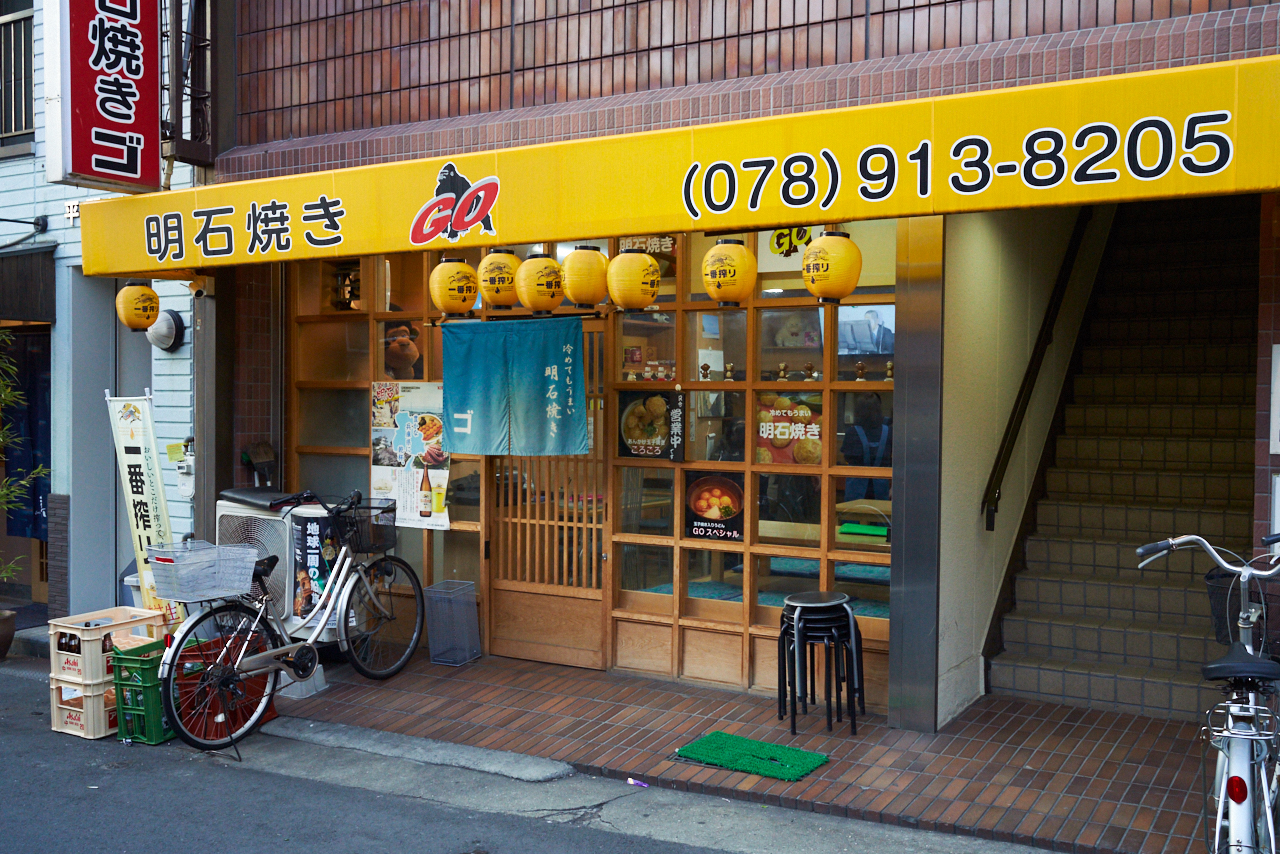 Here, akashiyaki are served up on bright red slanted boards with a side of dashi broth for dipping. There are a variety of different fillings to choose from as well, including cheese, shrimp, and kimchi to name a few. 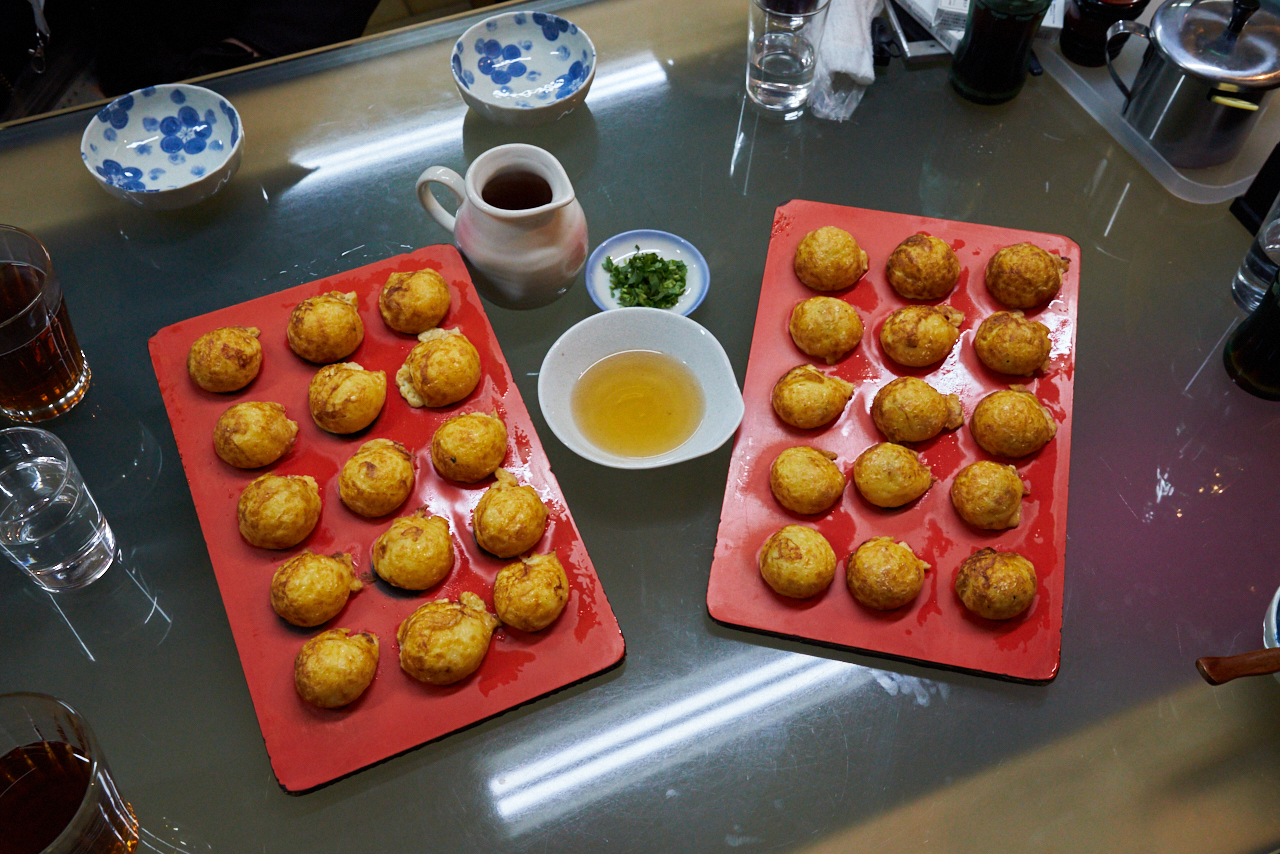 After a hard afternoon of snacking in the marketplace, it’s the perfect hot meal to end the day.